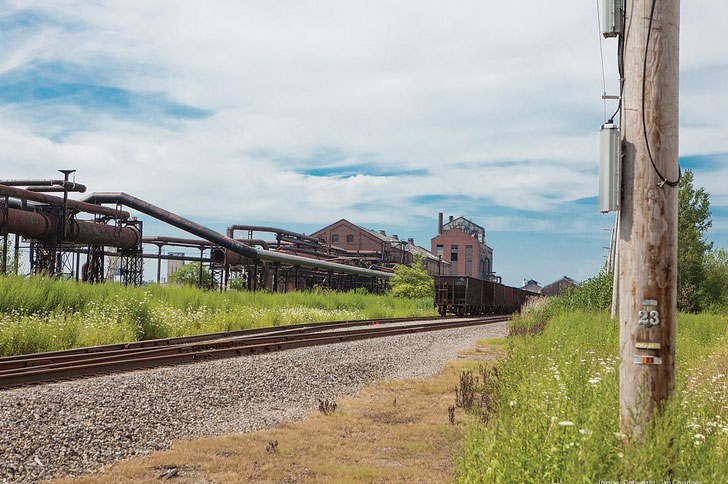 A pair of real estate transactions in Lackawanna could lead to new development at the former Bethlehem Steel Co.

Chris Wietig, Frontier Group’s director of business development, said work on the solar plant is expected to start next spring.

The $4.5 million project will have 5,824 modules – each about five feet tall. The power generated will be used by Frontier for a number of local projects, including the 500 Seneca St. building, he said.

“It will take a big bite out of our usage costs,” Wietig said.

Much of the solar farm will front on Route 5 (Hamburg Turnpike) and Jackson Street on a portion of the property that was heavily damaged in a November 2016 fire.

Frontier is working with Lackawanna on approvals needed. Some minor demolition may be needed.

“We want the site to look a little different from the road than the way it looks today,” Wietig said.

“It will make for a better transition from the residential nature of Jackson Street to the commercial aspect of the turnpike,” Stanton said.

John Cappellino, ECIDA president and CEO, said the land will be remediated and made shovel-ready to meet a growing demand for development sites between the Peace Bridge south toward Lackawanna and Hamburg.

TMP Technologies Inc. has developed a manufacturing/distribution site on some of the 154 acres along Dona Street extension running into Route 5, and Uniland Development Co. is planning a distribution center nearby.

“The immediate plan will be to look to sell and develop the sites immediately to the south of Dona Street as those are already served with utilities and road frontage,” Cappellino said.

Cappellino said the focus will be to bring light manufacturing and spec warehouse/distribution space to the 31 acres.

“We want to create employment opportunities for the residents of the county,” Cappellino said.

Close Menu
We use cookies on our website to give you the most relevant experience by remembering your preferences and repeat visits. By clicking “Accept”, you consent to the use of ALL the cookies.
Cookie settingsACCEPT
Manage consent

This website uses cookies to improve your experience while you navigate through the website. Out of these, the cookies that are categorized as necessary are stored on your browser as they are essential for the working of basic functionalities of the website. We also use third-party cookies that help us analyze and understand how you use this website. These cookies will be stored in your browser only with your consent. You also have the option to opt-out of these cookies. But opting out of some of these cookies may affect your browsing experience.
Necessary Always Enabled
Necessary cookies are absolutely essential for the website to function properly. These cookies ensure basic functionalities and security features of the website, anonymously.
Functional
Functional cookies help to perform certain functionalities like sharing the content of the website on social media platforms, collect feedbacks, and other third-party features.
Performance
Performance cookies are used to understand and analyze the key performance indexes of the website which helps in delivering a better user experience for the visitors.
Analytics
Analytical cookies are used to understand how visitors interact with the website. These cookies help provide information on metrics the number of visitors, bounce rate, traffic source, etc.
Advertisement
Advertisement cookies are used to provide visitors with relevant ads and marketing campaigns. These cookies track visitors across websites and collect information to provide customized ads.
Others
Other uncategorized cookies are those that are being analyzed and have not been classified into a category as yet.
SAVE & ACCEPT